Cami is 2013 2LT/RS. She is my first muscle car - I got her in May of 2014. I loved her just as she was.. I thought.. LOL - - Then I learned about modifications you can do to cars. I didn't just want someone to do that to her - I wanted to learn how to do it all myself. So as long as it is not ART related - - I put my own hands to work. It's been 2 years of learning... and now I'm hooked. I help rung a 5thGenGirlz group on Facebook - I'm always giving advice to other ladies on how to do their own mods... I think you can appreciate your car more when you know that what you are looking at and driving every day - was made possible by your own 2 hands. My Current List of Mods: Performance: MRT V1.0 Axel Back Exhaust. Injen Cold Air Intake Vitesse Throttle Control Engine Bay: Airbrushed Hood Liner w/LED, Engine Cover, Fuse Box, CAI Lid - Ande Airbrushing Blue LED lighting in the Engine Bay, Interior and Trunk Colored hose covering throughout the engine bay Strut Brace Chrome Tower Covers Exterior: Powder Coated Gloss Black MRR-M228 Wheels Carbon Fiber Hood Wrap – CB3 Customs Carbon Fiber Anvil Notch Spoiler ACS T5 Splitter Drilled and Slotted Rotors Personalized Hood Spears, Gills, Smoked Overlays, Front Black Out – Big Worm Graphix Drake Quarter Window Aluminum Riveted Covers Oracle Ghosted Side Markers Oracle Halo Color shift Headlight and Fog Lights – with Music Box. Custom Painted Bowties and Emblem – River City Creations Custom Trunk Liner – Jar Head Custom made-to-fit and painted 12” Sub-Woofer Box, 5 Channel Amp Upgrade – Car Toys Caliper Covers Tinted Windows Technostalgia LED Tail Lights Interior: Hurst Comp Shifter Stick and Plate RS Stainless Steel Kick plates Custom Painted Cup Holder, Bezels, Trunk Latch Cover, Safety Release, Engine Corner Cover, Shifter Bezel, Battery Post Cover – River City Creations Blue LED Floor Lights,

I bought her brand new in 2011 when I returned from Iraq, and it has been nothing but smiles ever since. She is a 2011 Ram R/T, a special edition of Rams that came with 4:10 gears, high stall torque converter, and 22" wheels. Dodge had only built 837 of these beast, and out of those only 119 where flame red. What I have done is,she been lowered 2/4 with belltech springs and shocks, Custom painted interior and engine bay, Kooks Long tube headers 1 3/4 with high flow cats, QTP electric cutout, Sonnax line booster, and a Hemifever custom tune. To see more of this beast check out my Instagram or YouTube page @ 11ram_rt

Show us your Ride

Proud of your Ride Show it off right here !!

and give us a write up telling everyone what you have done to it !!

I'm a rookie at this and just a little older than her (not that there's anything wrong with that!) at age 62, however, we're both aging gracefully. I got my 1965 Thunderbird May of last year/2016 in Los Angeles and we're enjoying our time together. You'll see us cruisin' in N Richland Hills and surrounding. Other than buying this treasure, my first investment as the new owner was some serious engine work this past winter along with a safety check...to date, April 10, 2017, still running with that engine break in motor oil. While we know there are so many after market parts available, my interest is to restore this to as much original as possible and to have everything working, again. The paint job was as already existed and shows some spotty failure, but, a new coating is not likely in the near future. While she looks pretty descent, she still needs some work, however, now mostly cosmetic...finding those acceptable original parts at a descent cost can be challenging but rewarding. We've only participated in 2 shows with the first on March 18 and 2nd showing was with our host on April 8. We were fortunate to have won each show with the restoration/under construction award. My goal is to get out of the restoration class. I'll continue to look forward to meeting car show hosts and fellow car enthusiasts and their prides...I'm certainly proud of mine. For you seasoned relic owners, please feel free to share your critique and suggestions if you see us showing...I'm always eager to learn.

This is Sneaky Pete

It has been my dream car for a little over 20 years. Picked it up last year and have been doing mostly routine maintenance to bring it up to present day condition. In addition to a bunch of little things, I have also done M&M headers, Belanger cat back exhaust, tune, and upgraded brakes. Hopefully adding a blower in the near future. The car already had 4.10 gears when I got it. It also has a pretty choppy cam from the factory (708 cam) and forged internals common to the older Vipers, so I frequently get asked about the engine build. Follow me on Instagram @ol_roc to see updates, mods, maintenance, shows, etc. If you see this snake at a local show, feel free to approach me to talk about/see the car. Just look for the yellow headlights.

2012 2ss/rs, purchased it August 2012. Since that time I have modified my car with lambo doors with vdi kit, also reverse tilt hood with kit by halo. Halo kit on headlight and fog light, ghost side marker lights,mirrors,and door handles by oracle. Reverse lights by oracle, taillights by technostalgia, door siles,fender vents. Interior hydrodipped,underhood airbrushed. Waiting on my latest modification, wheels by bonspeed,clutch with sergeant stripes.

74' Duster 225 slant six leaning tower of power. Numbers matching original car. Needs some love but all in all a nice cruiser. 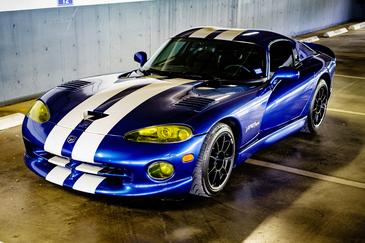 This truck is an extremely rare version of the F-150. Only about 500 Boss 5.4s were made in 2003; half were yellow and half were orange. I found this truck in Calgary, Canada with only 15,500 miles on it. It has the rare optional supercharger and even had the original tires! Boss 5.4s were sold new through Ford dealers as an aftermarket package. It is frequently confused with a Lightning, but there were ten times as many Lightnings produced. It appears that Roush produced some Boss 5.4 models in 2007. 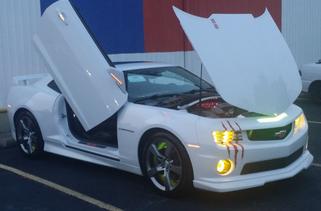 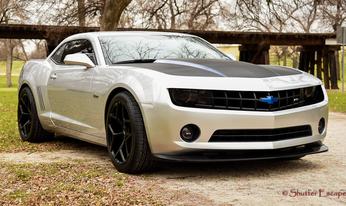 This was Buicks answer to the GTO. Just completed a full frame off restoration with no dollars being spared. Replaced floor from the firewall through the trunk and both rear quarters. The entire chassis was powder coated as well as the top frame; the radiator support and the inner wheel wells. The interior was changed to metallic parchment, added both the consolette with tach for the shifter and shorty console between the seats. The engine was bored .30 over and fully balanced. M21 was installed with 3.42 posi rearend. The engine was produced originally with 340 HP and 440 torque. All the chrome was redone and the stainless finely polished. Lots of options were added either before or during the restoration. Such as power windows and door locks; power trunk opener; right hand mirror; door edge guards; AM/FM radio and pin striping.

Although this car didn't come from the factory that way,

it is a fine example of what one would look like.

1988 Thunderbird Turbo Coupe was way ahead of its time. The cars of the day were boxy and square, yet the Thunderbird was aerodynamic and sleek. This proved itself on the Tracks of Nascar by dominating the series and causing GM and others to make changes to their lineup. It was technologically superior to many production cars with a 4 cylinder turbo engine, 4 wheel disc brakes w/ABS and a computerized ride control suspension. It is the epitome of luxury/performance with stock top speed of 145 MPH while being able to get 30 MPG. 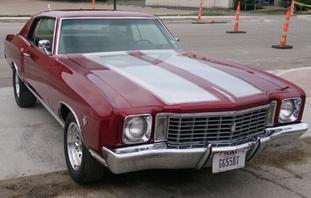 76 Monte Carlo it has air bags 5.7 engine the paint job is a black cherry color with peanut butter color interior

Bought this 1972 Monte Carlo in 2011 and did all the mechanical and electrical repairs myself. It is an authentic Texas car that was built at the GM plant in Arlington Texas. It is also a numbers matching 5.7 L 350 C.I. w/ TH350 TRANNY AND 2:45 GEARS This is a beautiful example of a 1972 Monte Carlo. It has 5 plaques to it's credit in only 8 car shows. This car is as sweet as well I will leave that to your imagination.